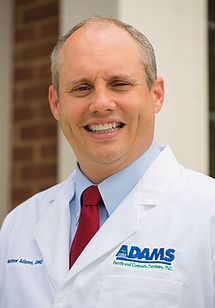 Dr. Matthew Adams grew up watching his father in the dental office. It was a natural fit when he decided to follow his footsteps and become a dentist himself.  Dr. Adams is a native of Columbus, Georgia. He attended Georgia Southern University in Statesboro receiving a B.S. in Biology. He then earned his dental degree and completed dental training at the Medical College of Georgia School of Dentistry in 2001.

Dr. Adams is an active member in the Georgia Dental Association (GDA) and is a past president of the Western District Dental Society. He also serves on the GDA Patient Protection Task Force and served as a GDA delegate in Washington, DC.  He is a member of the Academy of General Dentistry, American Dental Association and Pierre Fauchard Academy.

Dr. Adams and his wife, Amy, have three children. Between work and family, he is a busy guy. When he is not at the office you can find him on the soccer field coaching his son’s team or exercising. He is a member of St. Luke United Methodist church.

By using an effective combination of cutting-edge technology and time-proven methods, our team can keep your smile healthy and beautiful. Come see us today and discover your smile!